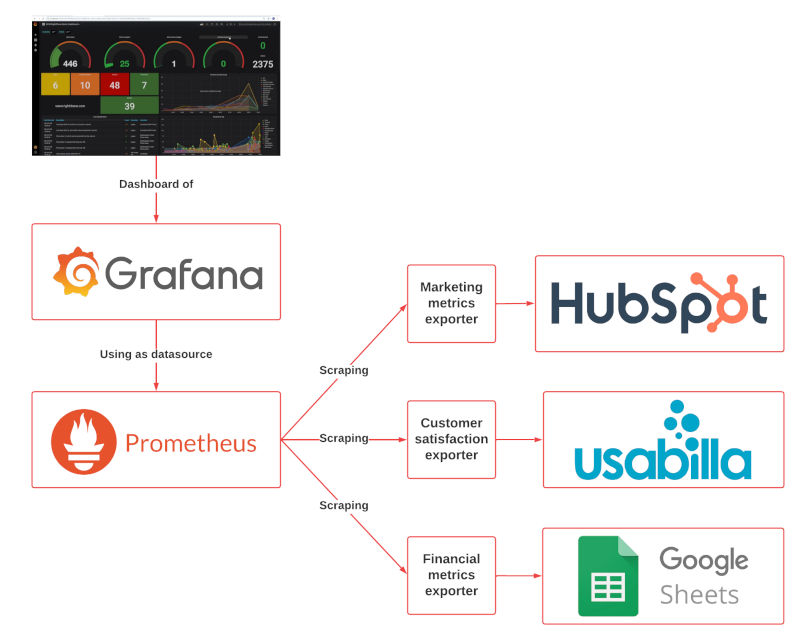 Visualizing business KPIs in a dashboard and being able to cross-reference metrics from different areas is hard when you have to deal with multiple systems. You probably have systems for finance, HR, CRM, support, etc. and of course also a lot of spreadsheets to glue everything together.

In this article I’ll explain a way to gather all the important metrics from different systems, store them in one place and visualize them in a dashboard.

Almost every system we use nowadays has an API. We could ‘simply’ build an application that consumes all the APIs from the different systems, store the data somewhere and create graphs to visualize the KPIs. But there’s a smarter way that doesn’t involve a lot of code and a lot of work. Instead, we use an open standard and open source software.

This is how it works;

The metrics exporter is the key component. This is where you need to write a bit of code to fetch the metrics from the API of the system you want to utilize. Since there are tons of libraries available for most systems and languages, it should be fairly easy to build an exporter for every system you want to include in the dashboard.

The exporter needs to expose a /metrics API endpoint which returns the gathered metrics in the OpenMetrics format. This is a format that Prometheus (and others) can interpret. Since it’s an open standard, there are also a lot of libraries available for most languages. Just search for ‘open metrics’ or ‘prometheus client’ in the package manager of your favorite language.

How it works; when a request to http://localhost:3001/metrics is received, the exporter will fetch the latest numbers from the Usabilla API and give the response in the OpenMetrics format;

Prometheus is the heart of the system. It consists of a few components that make it ideal for this use-case;

In Prometheus you can configure the endpoint of the exporter as scrape target;

This tells Prometheus to call the /metrics endpoint of the exporter every 60 seconds and store the metrics in its time-series database.

The last component is Grafana. Grafana is an application that allows you to visualize the metrics on a dashboard. By using Prometheus as datasource in Grafana it enables you to create fancy graphs with the metrics data stored in Prometheus. With the Usabilla example above we can easily create a graph that shows the number of feedback received over time by just querying the usabilla_feedback_count metric.

One other feature of Prometheus that can be very interesting for this use-case is alerting. You can define rules based on the metrics that trigger an alert. For example, the alert below will warn you when the number of feedback received is less than 5 over the last 24 hours. This could indicate an issue with Usabilla when you would normally receive a lot more feedback over the course of the day.

Giving structure to your Kubernetes configuration

Best practices for giving structure to your Kubernetes configuration

How to make a load testing plan