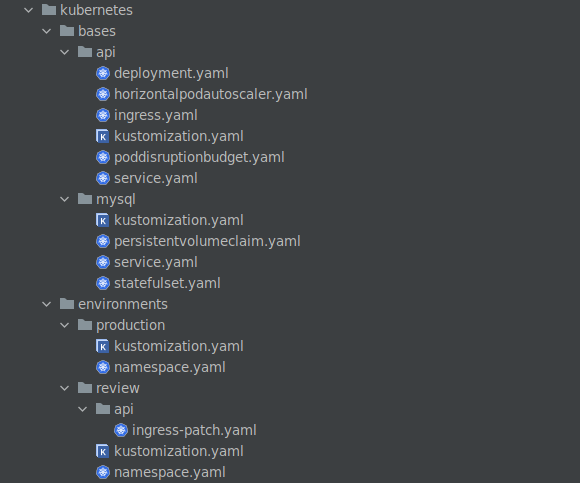 Giving structure to your Kubernetes configuration

The more complex your Kubernetes clusters become, the more you benefit from a good structure for the Kubernetes configuration. It keeps it maintainable, promotes re-use, and makes it easy to understand for everyone.

In every Kubernetes cluster you have shared services like the NGINX ingress, certificate manager, operators, etc. I always separate the deployment of those services from the project-specific deployments by putting them in a different project with its own deployment lifecycle. By doing that, you prepare yourself for when you’re going to deploy more than one project to the Kubernetes cluster. And it’s also a nice place to store the Infrastructure as Code configuration for provisioning the Kubernetes cluster.

Kustomize has the concept of bases and overlays. Instead of an overlays folder, I like to name that folder what it actually is. For the shared services project, this folder is to differentiate between the Kubernetes clusters. You can have one cluster that holds all projects and environments, or multiple clusters. I prefer to create one Kubernetes cluster for development purposes; this will contain the dev, test, qa, staging and review environments, and one cluster for production only. By having a development and production cluster, you can test the changes you make in the Kubernetes config on the development clusters first before rolling them out to your production cluster.

In this example, we have the NGINX ingress which is responsible for routing all incoming traffic to the right service. And we have the cert-manager, which makes sure we have valid TLS for every ingress.

This brings us to the following folder structure;

The example project that we want to deploy consists of an API app and a MySQL database. We have two environments; a review environment and a production environment. That’s reflected in the names of the overlays.

The bases should target production

Kustomize doesn’t have a way to do variable substitution. They have their reasons, and that’s fine, but in reality, you need some way to modify the manifests during the deploy jobs in the CI/CD pipeline. You probably want some secrets to be replaced with values from the secrets stored in the CI/CD pipeline. And, if you use review apps, you’ll want to give every environment a unique URL. So the ingress needs to be dynamic as well. Kustomize doesn’t have any functionality for this, so what I do is use envsubst to replace $VARIABlE with the value that is present in the environment.

This will step into the environment folder, find all yaml files and replace any variable it encounters with the value set as an environment variable.

To avoid using variables all over the place, I have one important rule;

That means that if you want to make the ingress dynamic with a variable, you need to create a patch file in the environments/review folder and use the variable there. For example;

Be aware that envsubt will try to replace any value that looks like a variable ($SOMETHING). You can limit its scope by giving the variables it should replace as arguments.

The key components of Kubernetes autoscaling

Autoscaling is an important feature of Kubernetes. With this feature, you always have enough resources for the workload, and when a node becomes unhealthy it gets replaced without affecting the workload. But you won’t get it automatically by just deploying your Pods on Kubernetes.

Create a DB backup from a pod running MySQL on Kubernetes

When using the MySQL docker image you can easily create a DB dump with this one-line CLI command.

Doing maintenance & debugging on Kubernetes with a support pod

Using a support pod is a simple and secure way to take a look around from within the Kubernetes cluster without interfering with the workload or expose a security risk.