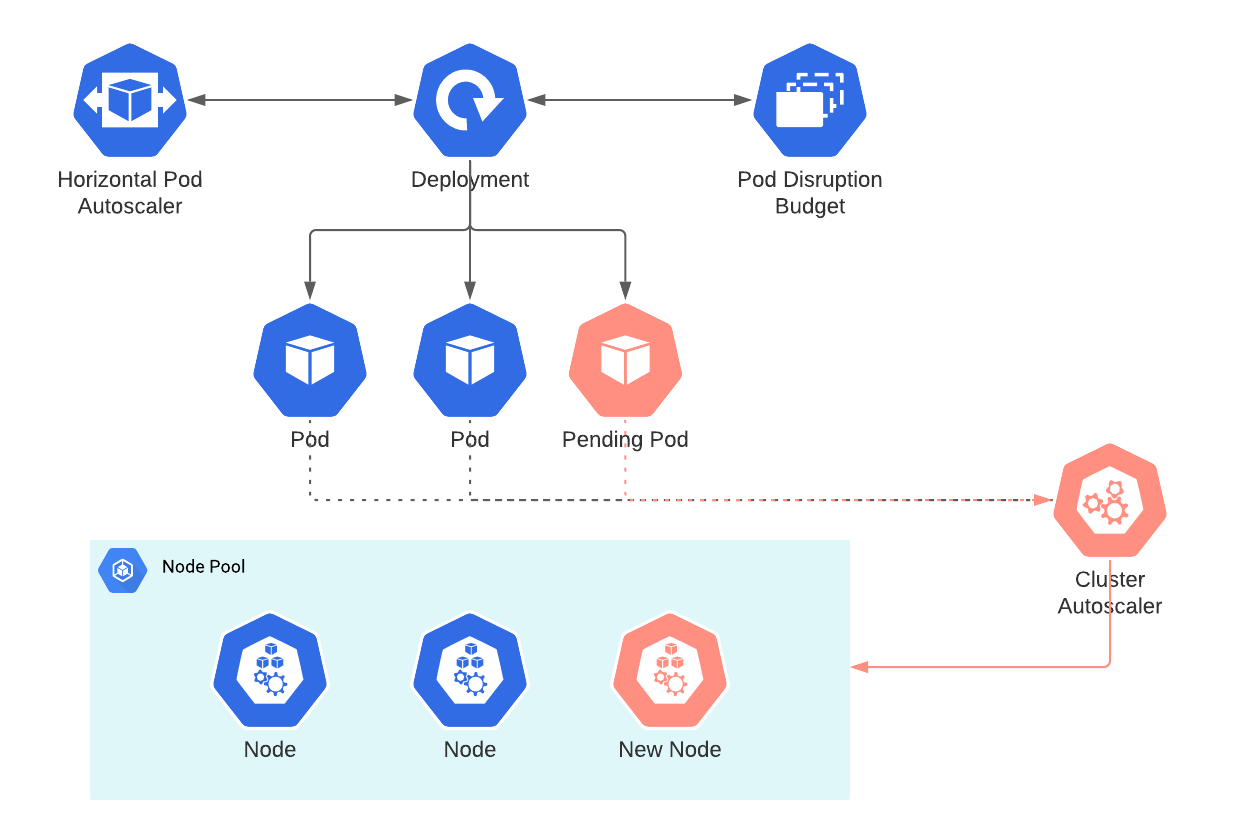 The key components of Kubernetes autoscaling

Autoscaling is an important feature of Kubernetes. With this feature, you always have enough resources for the workload, and when a node becomes unhealthy it gets replaced without affecting the workload. But you won’t get it automatically by just deploying your Pods on Kubernetes.

You need to provide the scheduler with information about your Pods, so it can make the right decisions when scheduling them.

A scheduler watches for newly created Pods that have no Node assigned. For every Pod that the scheduler discovers, the scheduler becomes responsible for finding the best Node for that Pod to run on.

The following components are needed to truly benefit from the autoscaling feature of Kubernetes;

They work together as shown in the following diagram. Each component is explained in the next chapters.

When you configure a Pod, you specify how much of each resource it needs. The most common resources to specify are CPU and memory, but there are others.

Per Pod you can specify;

The Cluster Autoscaler will notice a Pod is pending because of a lack of resources and acts upon it by adding a new node.

The resource request is configured per Pod like this;

To come up with sane values for CPU & memory you can take the following into account;

Pod disruption budgets allow you to configure the number of Pods that can be down simultaneously from voluntary disruptions. Voluntary disruptions are mostly triggered by the application owner or cluster administrator. This happens for example when a deployment is changed or a node is drained. The scheduler makes sure that when it’s evicting Pods, it keeps enough Pods running from the same deployment, statefulset or other controllers to don’t exceed the Pod disruption budget.

The cluster autoscaler is performing cluster administrator actions like draining a node to scale the cluster down. That’s why it’s important to configure these correctly when you want the cluster to autoscale and auto-heal.

Example of a Pod Disruption Budget that allows for 1 Pod to be unavailable at the same time.

Resource metrics can be defined as utilization value, e.g.;

When you define the metric as utilization value it will be calculated as the percentage of the configured resource request.

Let’s say you have a Pod with 1 CPU and 1 GiB memory configured as resource requests. With the Horizontal Pod Autoscaler configured as in the example it will scale up when the Pod is using 900m CPU or 900 MiB memory.

The Cluster Autoscaler is the component that adjusts the size of the node pool so that all Pods have a place to run and there are no unneeded nodes.

On most public cloud providers it’s part of the control plane which is managed by the provider. For AWS that’s not the case, you need to deploy it yourself.

The Cluster Autoscaler will monitor the Pods and decide to add a node when a Pod needs to be scheduled and there aren’t sufficient resources for the resource request of that Pod.

This works as follows;

It’s important to know that the scheduler is not capable of moving Pods to different nodes to make room for the new Pod. This can sometimes lead to inefficient use of resources.

The Cluster autoscaler will decide to remove a node when it has low utilization and all of its important Pods can be moved to other nodes. There are a few reasons which prevent a Pod from being moved to a different node. To move a Pod it needs to be evicted and a new one needs to be started on a different node.

Reasons why a Pod can’t be moved;

How to make a load testing plan

Create a DB backup from a pod running MySQL on Kubernetes

When using the MySQL docker image you can easily create a DB dump with this one-line CLI command.

Doing maintenance & debugging on Kubernetes with a support pod

Using a support pod is a simple and secure way to take a look around from within the Kubernetes cluster without interfering with the workload or expose a security risk.